Americans trust Amazon and Google more than the police or the government, according to a nationwide survey 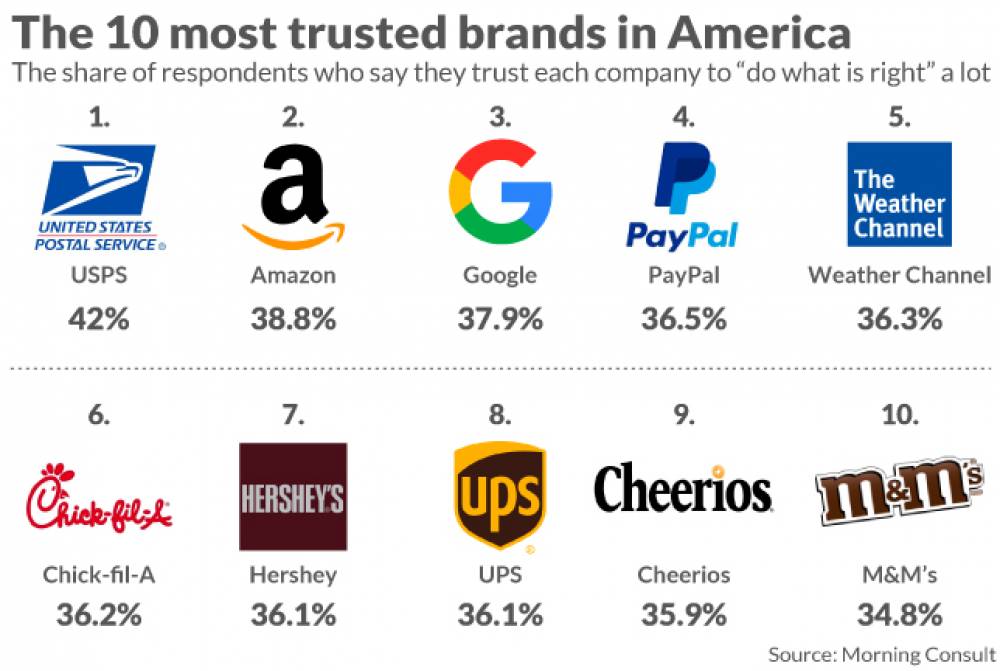 Americans believe in Big Tech. In fact, more people trust Amazon and Google will do what is right than they trust teachers, police officers, Donald Trump, the U.S. government or the news media, according to a nationwide survey from Morning Consult.

The digital media and research company asked subjects whether they trusted 20 different brands, institutions, public figures and ideas to do the right thing “a lot” in its inaugural State of Consumer Trust report. These entities included doctors, teachers and law enforcement officers, as well as public figures and celebrities. They were also asked whether they trusted information such as scientific studies or health and weather advisories.

And while distrust in general is running rampant in the U.S., with more than two-thirds of respondents saying that people have become less trusting in recent years, it appears that Americans have the most confidence in their primary doctors and the Armed Forces. The greatest share (50%) said they trusted their family physician to do the right thing, followed by the military (44%).

Amazon and Google take the third and fourth most trusted spots overall, with 39% and 38% of subjects, respectively, expressing faith in the tech giants. And that’s higher than their trust in extreme weather warnings (36%), teachers (35%), the police (30%), scientific studies (26%) and health warnings or advisories (23%.)

The least-trusted entity in America? Hollywood, with just a 4% share of citizens showing confidence in Tinseltown.

Morning Consult also quizzed subjects about specific companies, asking, “How much do you trust each brand to do what is right?” They could respond with “a lot,” “some,” “not much,” “not at all” or “don’t know.” And the company that drew the greatest number of “a lots” was the United States Postal Service, with 42% of consumers expressing confidence in the brand.

Get Crypto Newsletter
Market Cap
24h Vol
62.60%
Bitcoin Share
0
Today News
Read the Disclaimer : All content provided herein our website, hyperlinked sites, associated applications, forums, blogs, social media accounts and other platforms (“Site”) is for your general information only, procured from third party sources. We make no warranties of any kind in relation to our content, including but not limited to accuracy and updatedness. No part of the content that we provide constitutes financial advice, legal advice or any other form of advice meant for your specific reliance for any purpose. Any use or reliance on our content is solely at your own risk and discretion. You should conduct your own research, review, analyse and verify our content before relying on them. Trading is a highly risky activity that can lead to major losses, please therefore consult your financial advisor before making any decision. No content on our Site is meant to be a solicitation or offer