The pandemic is causing an economic crisis like no other. The U.S housing market is on the edge of a huge crisis, as many Americans aren’t able to pay their rent or mortgage.

About one-third of U.S. households have not made their full housing payments for July, and 13% paid only a portion of their rent or mortgage. 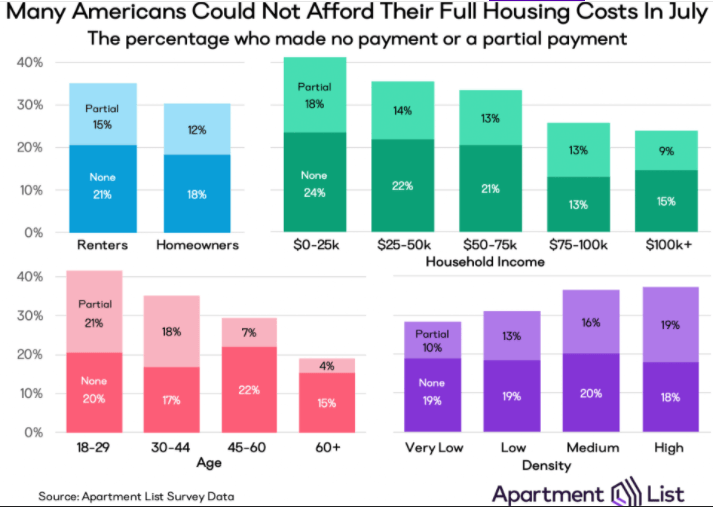 With the extra $600 per week in unemployment insurance set to expire at the end of the month, we can expect the number of defaults to increase.

JP Morgan, Wells Fargo, and Citigroup have been bracing for an avalanche of default loans because of the pandemic. They collectively set aside $28 billion in the second quarter to cover losses on bad loans.

The extra money set aside indicates that banks expect a slower economic recovery from the pandemic recession, marked by defaults. Spike in virus cases led many states to close sectors or suspend reopening plans.

JPMorgan now predicts that the unemployment rate will remain above 10% for the rest of the year and that GDP will take longer to recover. Stimulus measures have helped keep the economy afloat, but as those programs come to an end, the economy will be in big trouble.

A vaccine appears like the only way to get out of this pandemic-induced recession.


A Housing Crash Worse Than The Great Depression?

Economics professor Richard Wolff warns the pandemic could lead to a housing crash worse than the Great Depression of the 1930s because it hit so quickly and cut so deeply into our economy.

He noted that even before the pandemic, half of Americans weren’t able to handle an unexpected $1,000 expense. Government-mandated shutdowns made matters worse.

When mortgage or rents are not paid, landlords can’t pay off their debt to the bank. According to Wolff, we’re looking at months if not years of crushing litigations–another expense people will not be able to carry. It’s a tsunami in economic terms.

Big banks have money to cover their losses, but the average American doesn’t.

Wolff expects a surge in homelessness as eviction moratoria expire in August. Emily Benfer, a leading expert on evictions, said that the pandemic could make 28 million homeless in the U.S. between now and September.

Renters who are at risk of being evicted need financial assistance so they can stay housed, but canceling rent is not the solution.

Get Crypto Newsletter
Market Cap
24h Vol
60.35%
Bitcoin Share
20
Today News
Read the Disclaimer : All content provided herein our website, hyperlinked sites, associated applications, forums, blogs, social media accounts and other platforms (“Site”) is for your general information only, procured from third party sources. We make no warranties of any kind in relation to our content, including but not limited to accuracy and updatedness. No part of the content that we provide constitutes financial advice, legal advice or any other form of advice meant for your specific reliance for any purpose. Any use or reliance on our content is solely at your own risk and discretion. You should conduct your own research, review, analyse and verify our content before relying on them. Trading is a highly risky activity that can lead to major losses, please therefore consult your financial advisor before making any decision. No content on our Site is meant to be a solicitation or offer